Articles Puppy development stages and pitfalls of adopting out too soon
By Claire Grobbelaar, July 20, 2009 Posted in: Articles

Puppies experience certain developmental periods during which they are more adaptive toward novel stimuli. If a puppy is not exposed to a wide variety of experiences during the critical social periods, behavioural problems are more likely to occur.

According to Scott and Fuller (1965, Bar Harbor, Maine Study) dogs have various critical social developmental periods during the first 21 weeks of their lives and is divided up into the following sub-periods:

These studies have shown that if dogs are not exposed to the particular stimuli in above mention time frames, the dog has a higher risk of developing behavioural problems that are connected with these developmental periods i.e.

-Puppies that are taken away from there mothers before 8 weeks of age or that are hand-raised, will probably not interact normally with other dogs later in life.

-Puppies that do not see humans until 12 weeks may never develop proper dog-human interaction.

-Puppies that are not exposed to different environment and stimuli may become fearful, nervous, skittish, reactive and even defensive.

Newborn puppies are both deaf and blind and is thus virtually shielded from the outside world. Certain sense systems (movement, taste, smell and sensitivity to pressure), behavioural systems and reflexes are present to help the puppies nurse and to keep them close to their mother. Puppies that are forced to wean earlier than 15 days may become more prone to develop adult oral and motor compulsions involving suckling soft objects or their own limbs.

The behaviour of neonatal puppies is mainly composed of unconditioned reflexes to ensure adequate warmth, nutrition and elimination. Even though neonatal puppies are developmentally insulated from the environment, some external influences may have long-term effects on learning, emotionality and general adaptability. Gentle human handling by the breeder, involving as little as 3 minutes per day and exposure to various very low levels of environmental stressors, i.e. changes in the ambient temperature and movement (gentling), may have positive impacts on a puppy’s resistance to disease, and emotional reactivity and mature learning and problem solving skills (Morton 1968, Fox; Stelzner 1966). Studies have shown that animals left undisturbed during neonatal development were found to be consistently more emotionally reactive as adults (Denenberg 1964; Levine and colleagues 1967).

This period is marked by progressive neurological development with regards to locomotor ability. The mother is the puppy’s primary social object with the puppies only being vaguely aware of his littermates. During this period the eyes and ears open, the teeth emerges and the puppy develops more control over voluntary behaviour. During this period the puppy begins to leave the cacoonlike protection of mother and emerges into a field of widening sensory experiences.?

The primary socialization period (3-5 weeks) is especially important for the development of stable emotional temperaments. Between 3 and 5 weeks an interest in social interaction takes place. A constellation of interrelated behaviour patterns and emotional tendencies appear at this time, signifying a lively social awareness and responsiveness. Puppies begin to exhibit more intense signs of distress when briefly separated from the mother and littermates. Group activities (allomimetric behaviours) and social play begin to appear. Playful aggressive and sexual encounters occur frequently between littermates. Predatory components of play i.e. stalking, chasing and shaking also appear. This is also a very sensitive time for puppies to learn bite inhibition. Puppies that have been taken away from the litter too soon tend to bite harder than the norm. Many social and emotional problems observed in adult dogs are believed to be the result of removing the puppies too soon from the mother and littermates.

With the onset of the socialisation period at 3 weeks a more pronounced and clear EEG activity can be seen, with and adultlike EEG pattern starting between 7 andamp; 8 weeks of age. These EEG changes are correlated with significant emotional and physiological developments associated with the socialization process. Behaviours that can be attributed to early weaning range from over reactivity, low frustration tolerance, increased vigilance and anxiety. These dogs are prone to develop separation distress as they form over attachment with their owners. These dogs are also prone to develop aggression towards other dogs as adults (Pfaffenberger, 1963) as they may view strangers and other dogs with suspicion and view them as threatening. Some dogs may even become overly fearful towards strange dogs and humans and this can lead to fear aggression.

During the secondary socialization period (6-12weeks) the process of bonding and social conditioning towards humans and the domestic environment is done. For most dogs this secondary socialisation period starts once the puppy leaves its mother and littermates and joins a new household. The ideal age recommended by breeders to start adopting the puppies out is 8 weeks of age, as this is period where the mother shows an increase in irritability towards her litter and she is lactating less and less and shows little interest in nursing the pups. It is also usually around this time that maternal punishment peaks as puppies’ teeth are sharp as their appetites (Rheingold 1963, Wilson 1984/85). It is around this time that the mother has fulfilled her duties, both nutritionally and psychologically, thus making 8 weeks of age a very sensible time for final weaning.

Agonistic interaction between littermates also peaks at this time. Even if their aggressive play is not intended to hurt, the skills and attitudes developed by such agonistic play and competitiveness can have negative effects on their adult behaviour.

The Rule of Sevenandnbsp;states that by the time the puppy is 7 weeks old it should have been exposed to the following situations (or more) by the breeder:

The strongest support for encouraging adoption during week 8 is the appearance of two opposing social dimensions (fear and attraction). Several motivational parameters associated with bonding and socialization peaks at this time. (Scott and?Fuller 1965). Distress vocalization and reactive behaviour exhibited during brief isolation from littermates reaches its peak at around 7 weeks of age but undergoes a rapid decline through week 10. Also peaking at this time is a puppy’s willingness to approach strangers confidently and to investigate novel things with vigorous tail wagging. The balanced interplay of attraction and fear is fundamental to bonding and socialization in the broadest sense as puppies are now at their most prepared to experience the most efficient secondary socialization.

Adopting out too early (before 8 weeks) or too late (after 12 weeks) is in conflict with the appropriate socialization and can predispose puppies to develop social adjustment problems as adolescents and adults.

Does your dog struggle with having her toenails cut? If so, Tellington Ttouch can help take the stress out of nail trimming

There is another, newly discovered, feature of dog body language that may surprise attentive pet owners and experts in canine behaviour. 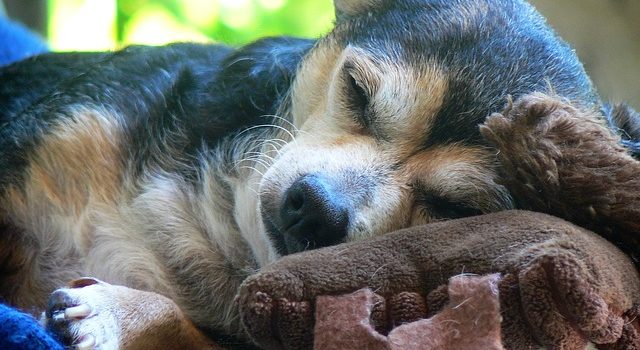